Observed stop arrivals and departures through the SF Bay Area

Interline and the Metropolitan Transportation Commission have been archiving and processing the Regional GTFS Realtime feed in order to answer these questions.

What are stop observations?

“Stop observations” describes transit service as was delivered to riders: the arrival time of a vehicle at a designated stop, along with any additional contextual information available from GTFS and GTFS Realtime feeds.

Stop observations are inferred from public GTFS Realtime data feeds (trip updates and vehicle positions) and therefore, there are many potential sources for measurement error. Potential sources of error include GPS error on transit vehicles, misassignment of vehicles to “runs” of a given trip and route, imprecision or data errors in the transit agency’s computer-aided dispatch/automatic vehicle location (CAD/AVL) system, issues in the transit agency’s GTFS Realtime emitting system, issues in 511.org’s GTFS Realtime aggregation system, or issues in the Regional Realtime GTFS Feed.

What information is contained in a stop observation?

The stop_observations.txt file is a CSV file based on the GTFS-Performance draft proposal. GTFS-Performance is an extension to the GTFS specification prepared by Remix, Swiftly, and their partners.

How are stop observations calculated?

Stop observations are derived retrospectively using an archive of the Regional GTFS Realtime Feed (updated every 15 seconds). Once a day, our workflow processes GTFS Realtime trip updates and vehicle positions from the archive, combined together with the day’s static GTFS daily regional feed.

Deriving stop observations from trip updates: When an agency supplies GTFS Realtime trip updates, our workflow identifies the final TripUpdate sent before a vehicle reaches a given stop. From that record, our workflow extracts the most recent StopTimeUpdate. Here is an example showing three trip updates fetched from BART. The first two trip updates are before the train reaches Montgomery Station; the third trip update is after the train departs Montgomery Station. The portion of all of the records that is use to create a stop observation is marked with the orange box: 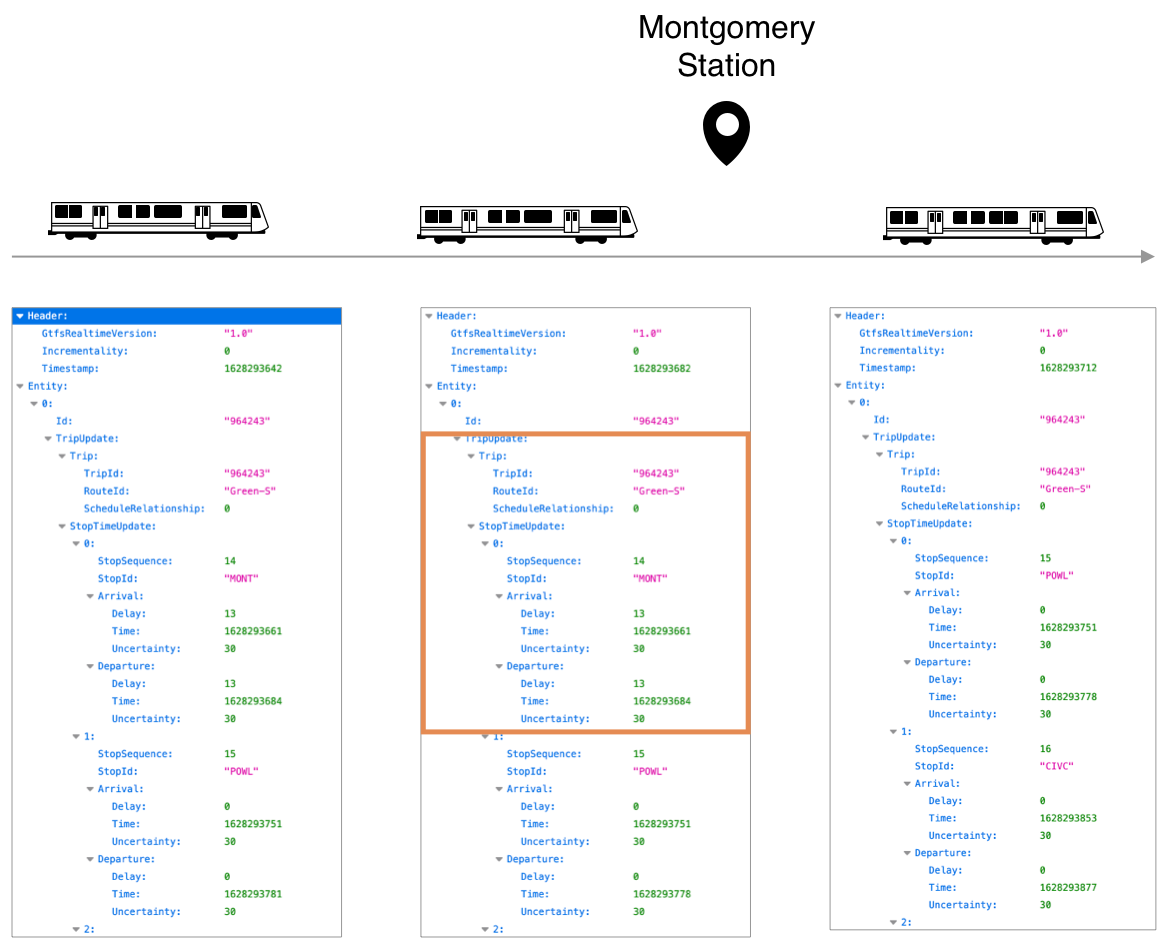 Deriving stop observations from vehicle positions: When an agency supplies vehicle positions for a given route, our workflow also identifies the last update sent before the stop location. To do this, we need to consider the geometry of the route alignment from shapes.txt in the static RG feed. The workflow snaps the latitude/longitude point from each vehicle position to the route alignment, enabling it to determine from which update to take the StopTimeUpdate portion. Like many geometric algorithms, this approach can be stymied by complicated paths, such as looping routes that visit the same station multiple times. Our workflow can take advantage of stop sequence, when specified. Still, the algorithm can only do its best to estimate when the route alignment is complicated and/or the update frequency is infrequent.

By being able to derive stop observations from two different parts of GTFS Realtime feeds, we have also been able to test and tune our workflow, to ensure that the two approaches agree when source feeds are of high quality.

GTFS-Performance and TCRP G-18 go well beyond the functionality that we have implemented in our system for producing stop observations, to also address more internal operating concerns of transit agencies. We have intentionally implemented our system to create stop observations using only publicly available GTFS and GTFS Realtime inputs.

Stop observations are available on a more frequent basis to staff at MTC and Bay Area transit agencies. Transit agencies may contact the 511 SF Bay Data Portal at mailto:transit@511.org for more information.

While we began this blog post by asking When did the bus arrived at that stop yesterday?, we hope that users of stop observations will ask an even wider range of questions of this dataset, especially questions that can explore the complexity of daily operations for over 20 agencies operating buses, trains, subways, and ferries across the Bay Area and questions that can help to improve the experience for riders using navigation apps and similar software.

Originally posted to the Interline blog on July 15, 2022 by: